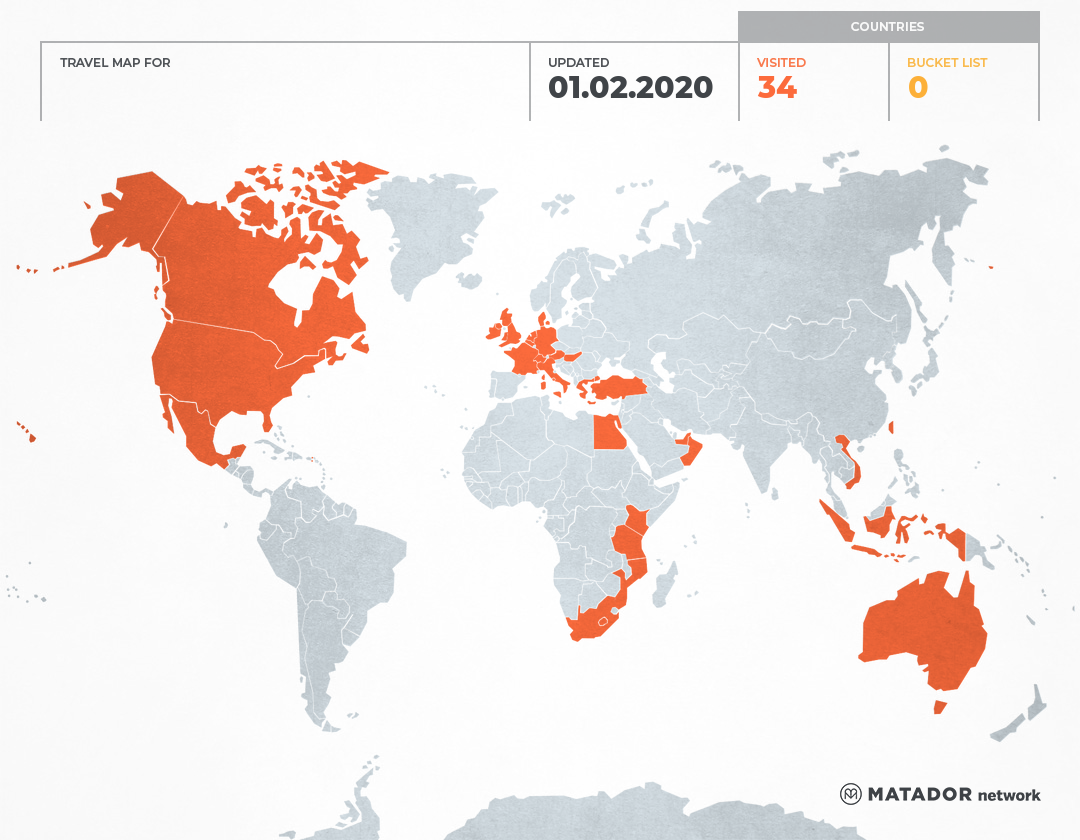 I will do my best to keep this itinerary updated on a regular basis and will include a brief description of what I plan to do beside each destination where I can.

August 4 – September 2 – Budapest, Hungary to compete in the 2017 FINA World Master Swim Championships, then travel around for another two weeks.

May – US National Parks: Grand Canyon, Zion and Bryce Canyon

September 4 – ??? – Back home to Vancouver for some family time.

June 8 – September 4, 2014 – Back to Greece to work on the island of Naxos for another summer as a divemaster.

September 17-20, 2013 – travel from Amorgos to Salalah, Oman via Athens to start the next adventure: being a divemaster in the Middle East!

June 29, 2013 – Leave Zakynthos for Amorgos (an island in the Small Cyclades) to continue work as a divemaster.

March 2013 – A month spent in the Central Coast of BC, working as a cold water divemaster.

February & April, 2013 – Vancouver for a couple of months to dive, make some money and see my friends, before heading out on my next adventure!

January 9 – January 26, 2013 – Orlando, USA to visit one of my best friends, John, and get in a few workouts as he finishes up his personal training course!

October 15, 2012 – January 9, 2013 – Complete my PADI Divemaster, DSD Leader and EFRI certifications and do an amazing 5 week internship with Sail Caribbean Divers in the British Virgin Islands

March 23 – October 11 – VANCOUVER!  Six and a half months at home to catch up, rest, eat, do laundry and visit with friends and family.

March 19 – March 23, 2012 – San Francisco to meet up with one of my best friends Sara, and her husband, James.  Took a quick look around the city and enjoyed the sights and tastes!

February 9 – 19, 2012 – Back to WA, a quick trip down to Busselton for some amazing diving on the jetty and the HMAS Swann, and then a great week in Perth visiting with some fantastic friends.

November 23, 2011 – February 3, 2012 – Cairns, Queensland: working on a liveaboard diveboat TAKA as a Purser and enjoying the tropics!

May 8 – August 28 – Naracoorte, South Australia: Living with my boyfriend (at the time) Henry and his family, working at Maddies Cafe.

February 19, 2011 – Depart Johannesburg, and South Africa, for the last time.

January 4-6, 2011 – Cape Town to Jo-burg via the Karoo: ROAD TRIP!  Can’t wait to see what this part of the interior has to offer while I finally return the car to my aunt and uncle!

December 20-29, 2010 – Johannesburg: Back inland to spend some time relaxing with family over the holidays.

November 12-December 20, 2010 – West Beach/Table View, Blouberg, Cape Town, South Africa: Five and a half weeks in the suburb of a beautiful city.  A new obsession begun and some good friends made.

November 9-11, 2010 – Stellenbosch and winelands, South Africa: a few days among the vineyards of South Africa, tasting the best of what the country has to offer.

November 4-8, 2010 – Garden Route and South Cape, South Africa: One of the most beautiful drives in SA we’re told.  We will visit Cape Agulhas and the Cape of Good Hope on our way to the Western Cape.

October 30-November 4, 2010 – Bellito and Kwa-Zulu Natal coastline, South Africa: basing ourselves out of my Aunt’s house in Bellito, Lisa and I hope to learn to scuba dive in the Indian Ocean.

October 26-30, 2010 – Drakensburg Escarpment, South Africa: Lisa and I can’t wait to get to this beautiful area of SA, and are going to stay a bit longer than we intended and hopefully get to Lesotho for the day!

October 17-19, 2010 – Johannesburg, South Africa: a couple of days to tour around the area, including Pretoria and Soweto, and spending some time with my Mom’s family.

October 14-15, 2010 – London, England: sleeping, eating, drinking.  (I’ve been to London before and done most of the touristy stuff.  This time Lisa and I will be hanging out in some ‘local’ haunts trying to get more of the flavour of the city)